During the pandemic we are only delivering to customers on the island of Ireland.

Please note that we have a minimum order value of €30 before shipping charges are added.

Itoh hybrid peonies are crosses between herbaceous and tree peonies.

The benefit of this cross is that you get a plant with the best attributes of both of the parents.  They start flowering in May - June like herbaceous peonies but have a much longer flowering period - 8 to 10 weeks on a mature plant (compared to 4-5 weeks for normal herbaceous peonies).  A five year old plant should grow to about 1 to 1.5 m by 1 to 1.5 m (depending on variety) and have over 100 blooms over the flowering period.  From the tree peony parents they inherit their large flower size and diverse range of colours. They make idea feature plants on their own or within a herbaceous peony border.  As far as care is concerned they are treated like herbaceous peonies with the exception that you do not cut them back totally in autumn.  They tend to form a low woody framework (obviously inherited from their tree peony parents) that you can tidy back to about 45 to 60 cm in autumn.  In spring, around late February or early March, you give them their proper pruning, cutting the woody stems back to the highest live buds - these will be red/pink in colour (black buds are dead).  The extent of this pruning will be dependent on the winter conditions, some years you will have sprouting woody stems 30 to 45 cm but after a severe winter they may be cut right back to ground level in which case they will re-shoot from below ground just like herbaceous peonies.

History: These peonies are named after Dr. Tiochi Itoh from Japan. From the early 1900’s he tried to cross the beauty of the tree peony with the hardiness of the herbaceous peony. After failing 20,000 times, Dr. Itoh finally succeeded in 1948 when he crossed Paeonia x lemoinei (a hybrid tree peony) with Paeonia lactiflora ‘Kakoden’ (a white flowered herbaceous peony). He was able to produce 36 seedlings. Some had more characteristics of the parent tree peony, whilst others had more characteristics of the herbaceous parent. They became known as ‘Inter-sectional’ hybrids because of the cross between section Moutan (tree peonies) and section Paeon (herbaceous peonies). The first flowers from  these seedlings bloomed in 1964. Unfortuantely Dr.Itoh never saw these blooms, as he had passed away in 1956.

From the original 36 seedlings six were considered to be outstanding and in the late 1960’s an American horticulturist patented 4 of these hybrids as ‘Yellow Crown’, ‘Yellow Dream’, ‘Yellow Heaven’ and ‘’Yellow Emperor’.  In 1986 ‘Bartzella’ arrived. An improved yellow form of the original hybrids and sold for US $1,000 per single division. Thankfully they are much cheaper now due to tissue culture developments. Below are the varieties that we are offering for sale in 2013 and 2014. 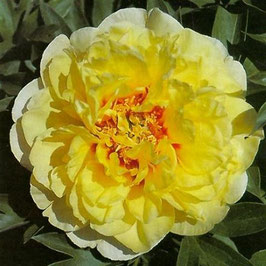 First registered by Hollingsworth in 1992.

Large, semi-single pale yellow flowers, petals darker to centre with red flares and a prominent centre of sheathed carpels.  Height 50-65 cm when mature, but may spread to as much as 120 cm.

Vivid golden yellow with prominent red flares. Primary blooms are 10 cm across with smaller side blooms.

Semi-double to Double. A lovely shade of lavender pink, carpels are enclosed by a lavender sheath and circled by yellow stamens and red flares at the base of petals; 15 to 20 cm blooms on a mounded bush.

Double. Large flowers opening a very dark pink that gradually fade to cream colour on the upper part of the petals, whilst the part stays rose-red. When mature it will hold many flowers in different stages of fading. 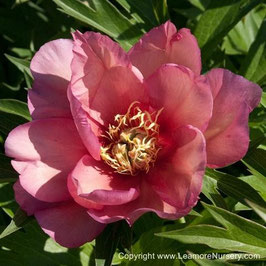 First registered by Anderson in 1991.

Large semi-double flowers opening coral-red fading to soft apricot with purple-red edges on the petals. Fragrance has a slightly spicey edge to it.

Large yellow semi-double flowers, similar in form to Bartzella but with a very special feature! The flowers are generally yellow with pink streaks on some petals. In Lemon Dream, sometimes the plant can generate a flower half yellow and half pink! Excellent for the garden or for cut flowers.

Semi-double to Double. Yellow flowers with purple candy stripes through flower giving these blooms the appearance of a lollipop.

Fuchsia in colour with dark purple and/or white streaks running down the petals. Has good plant habit and dark green foliage. No fertility noted. An unusual color on a large-petaled flower.

First registered by Hollingsworth in 1992.

Slightly fragrant. Medium-sized semi-double butter-yellow flowers with 20 to 30 petals that are brushed with scarlet in their centres. They encircle creamy tipped green carpels and a ring of long golden stamens. Height 50-65 cm when mature, but may spread to as much as 120 cm.

Single. One of the rare red colored intersectional hybrids. Large simple flower of a shining red with a center of golden stamens. Fragrant.

First registered by Pehrson/Siedl in 1989.

Functional cookies enable this website to provide you with certain functions and to store information already provided (such as registered name or language selection) in order to offer you improved and more personalized functions.

Performance cookies gather information on how a web page is used. We use them to better understand how our web pages are used in order to improve their appeal, content and functionality.

Marketing / Third Party Cookies originate from external advertising companies (among others) and are used to gather information about the websites visited by you, in order to e.g. create targeted advertising for you.